Well if you don’t know who Bob Hope is, I can’t say I really remember him either.  Which means I’m probably right when I say I’m a Millenial although I feel like I’m teetering in No Man’s Land – smack in between Gen X, Millenial and who the fuck knows what other Z or Y generation are. 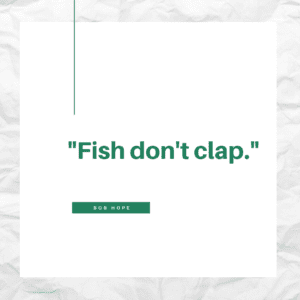 Bob Hope was a famous comedian, and had a huge following.  He was still working pretty hard into his 90’s.  So one time a reporter pulled him aside and said “hey Bob, why work so hard when you don’t have to?  Why not retire and go fishing?”  He quickly and wittingly responded “Fish don’t clap”.  He went on to say “If I retired, I’d be surrounded by 9 psychiatrists. I’m not retiring until they carry me away, and I’ll have a few routines on the way to the big divot.”   Bob lived until he was 100 and passed in 2003.  That’s certainly a life well lived, and a philosophy that can guide us all.

As humans once our primary needs are met (food, clothing, shelter, security, healthy relationships, then some personal success) – we want significance.

We want to make a difference for other humans.

We want to leave our mark on the world.

When Bob said “fish don’t clap”, he very simply was saying I’m bored fishing, I’m not making a difference fishing, and I love the work that I do.

That’s what we want for you with Indestructible Wealth.

I want to help you get the money issue out of the way as quickly as possible, so that money is never the issue for the rest of your life.  That you can focus your time, energy and resources on doing what you love to do, in a way that makes a difference for others.  If you want to help the poor, it’s best that you aren’t one of them.