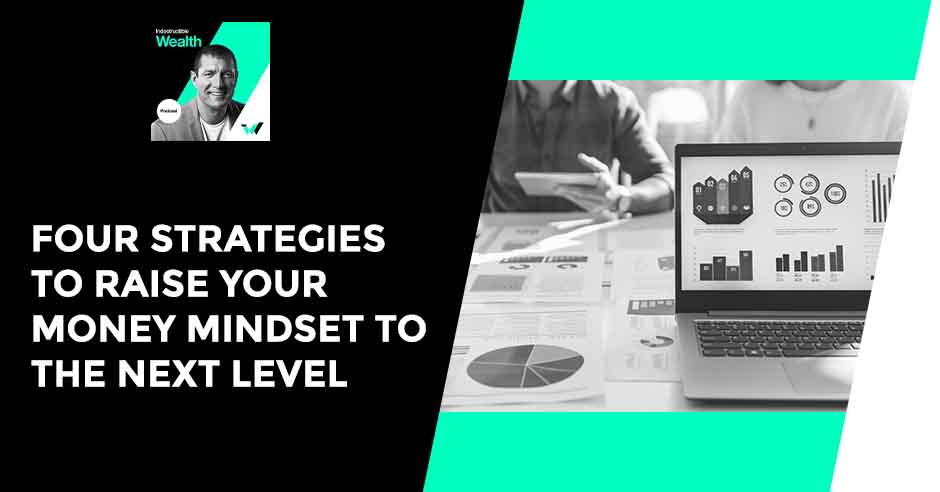 How do you develop a money mindset? How do you instill it in your kids? Tune in to find out.

Want more? Visit me at www.myindestructiblewealth.com for more tips and tricks to building wealth.

Listen to the podcast here

Four Strategies To Raise Your Money Mindset To The Next Level

I’m going to go through four strategies or tips on how to increase your money mindset. Most of them are free. There’s one where you’ve got to pay a little bit of money, but trust me, it’s definitely worth it. These are things that I’ve done over the years to increase my ability to attract more money and be able to handle and increase my capacity to be able to attract more Benjamins to me.

Before I do that, I want to tell you that over the last hour, I’ve been in super hyper-productive mode, sitting on my chair in my living room, taking stories that were in archive on Instagram, and putting them into the Highlight section. When you go to my profile page on Instagram, let’s say you haven’t been following me on my stories, which you’re missing out. It’s pretty entertaining. I go back and watch them, and it cracks me up.

I took some different categories, but one of them was family comedy. You guys can go in, you could see all the banter between me and the fam. I only put stuff in there, but it got people put the laugh emoji, messaged me back at least three times where people responded with a laugh. Go through that when you’re bored and I think you’ll be entertained. There’s some good stuff in there.

Let’s get into the four tips because I’m going to help you guys expand your capacity and ability to attract greater levels of wealth. Some of these you might think are stupid or don’t make sense. I would do them. They worked for me. I was also taught these by other people that were very wealthy, so I’m just passing these on. I feel like these have definitely made a difference.

Stack Cash In Your Wallet

You want to leverage every edge that you can if you want to build serious wealth. Tip one, you guys aren’t even going to believe this. I know you guys don’t do this. Keep cash and a substantial amount in your wallet or on your purse that’s on you at all times. Think $500 or more. I’m always stacking cash in my wallet. I’m not worried about getting robbed. If I get robbed and somebody gets off with my cash, so be it. I could replenish that money fast.

The feeling that it gives you is abundance. You can look at most things and say, “I can buy that.” The key is not to buy it unless you need it, but here’s the problem most of you have when you don’t carry any cash and you look in your wallet or your purse, and you’re like, “It’s empty because I use a debit or credit card.” You’re sending a message to your subconscious mind that you’ve got an old mother’s Hubbard’s Cupboard that is empty.

You don’t want to open up your wallet and then moths fly out of it because there’s no shit in there. Let’s start stacking up some cash. I’ve never lost cash, but I should say that when I was at the fair, I dropped $50. It somehow came out of my pocket. Other than that, I don’t lose much cash. It doesn’t come out of my wallet. It’s not going to come out of your purse.

Pick Up Loose Change From The Ground

Number two, this is silly but it’s fun. Make it fun. It can work. Pick up loose change when you see it on the ground. Most people don’t bother to pick it up. Is it going to change my net worth a whole lot? No, but I pick it up and I say, “I’m a money magnet.” I’ll yell it. Maybe people think I’m weird, but I’ll do it. Or I’ll say, “Money flows to me in abundance or money flows to me effortlessly, or multiple streams of income.”

Guard Your Mind Before Bed

Along those same lines, tip number three, guard your mind before bed. We’ve never had a TV in our bedroom in our entire married life. Especially, do not watch the news before you go to bed. So much crazy negativity is on the news. Think about that. How much is really positive when you watch the news? 5% maybe. You’re watching all this lack, this negativity, all of this garbage before you go to bed.

The other thing you don’t do before bed is don’t watch the news or I would get the TV out of your fucking bedroom for real. There are other things you could be doing in your bedroom besides watching the news. Don’t pay bills. Don’t read anything negative. It’s going to plant that negativity in your mind all night long and affects your mindset. Instead, read or listen to something positive even for a few minutes.

We made a mistake, or at least I did. I don’t know, it didn’t seem to affect Kara. We got into this show called The Handmaid’s Tale. It’s an incredible show. The acting is ridiculous. It’s really dark though. I’m warning you, it’s a very dark show. I’m talking like up there with Breaking Bad, not quite to that level, but pretty damn close. A good show, but really bad for you. We’ve watched it in bed together as we fallen asleep. I was getting some nightmares, like really bad dreams that shook me. I had to go to my pastor actually and talked to him about it, and then we traced it back and we’re like, “You’re watching some bad shit before bed. You better get into something else more positive.”

I’m guilty of this. It’s what has worked for me over the years and predominantly, I’ve been doing what I’m telling you to do right now, positivity. For whatever reason, I let it in. I told Kara, “I cannot watch this with you.” We were close to the end like five episodes left in the fourth season. I just told her, “I can’t watch this before bed with you. It is not good for me.” Guard your mind before bed.

Number four, increasing your money mindset, play games, and even better, play them with your kids. Here’s what I mean. There are two specifically that I recommend. Number one, Monopoly. It’s Earth-shattering. Monopoly has taught me by playing this game, it literally translates the mindset, and the strategy translates into real life real estate.

Monopoly teaches you to think about buying cashflow-producing property that generates rents, managing your cashflow and not overbuying or overleveraging, being able to utilize debt to be able to buy more properties, and my favorite is upgrading. Converting the four greenhouses to one red hotel. That’s what I’m doing right now. I’m liquidating some of my single-family homes that have gone up in value and equity, and I’m taking those funds and I’m converting it into larger projects like self-storage syndication, to where it’s even more passive. I can generate even higher returns. We can leverage off the expertise and the efforts of a big team that has done this successfully for ten straight years and generates higher average returns.

This is why I played Monopoly. I’ve been playing it with my sons many times. In fact, I posted on social media multiple times playing Monopoly with my kids. I don’t let them win. If you know me, they’ve got to earn it. I never ever let my kids win. Kara is like, “Come on. He’s three, you can let him win.” I’m like, “No, I’m not letting him win. He’s going to have to earn it.” When he was five, he started beating me, not every time but he could definitely beat me in the game. I think this is really cool to play with your kids.

The second game that I recommend playing is called Cashflow Board Game. I posted it on my story. I played this with my kids in the past, but it was other people who brought the game over. I wanted to have this game so we could play it over and over again. It’s all about how to play your way out of the rat race. Robert Kiyosaki, who wrote the book, Cashflow Quadrant, Rich Dad, Poor Dad.

Money Mindset: Playing Monopoly helps to reveal your investing personality. The way that you show up in everything is how you do anything.

It’s an incredible game in terms of being able to invest smart. You start off, you pick your profession, and then whatever profession you’re in, that’s the income that you get throughout the whole game. The goal to win the game is that you have to accumulate enough assets that produce cashflow, that cover your monthly expenses, then you have officially escaped the rat race. The first person to do it and cross the line wins.

It helps you understand and start thinking about how to generate passive income to cover your expenses. It helps to reveal your investing personality. You learn a lot about yourself. The way that you actually show up in everything is how you do anything. How you show up in this game shows you and reveals to you how you’re actually going to invest in real life. If you think that these are just silly kids’ games, I would reconsider and think again. I have personally used these exact strategies from these board games to build a multimillion dollar real estate portfolio, and to build multiple sixteen different streams of income.

A lot of it was from the books I’ve read and the games that I’ve played. Make sure to have fun. Make sure not to let your kids win. Make them earn it. Go out and increase that money mindset. When you’re in your Instagram Story, take a picture of you playing the games or implementing any of these strategies, and tag me, @IndestructibleWealth. I think that would be cool if he do that.

I’d love to see you pick up some loose change and say, “I’m a money magnet.” Yell it out, and then post it on your Story. People think you’re weird or whatever, but they’re not living your life and they don’t care what your bank account is. This is important to you. This is your life. This is your financial life. You’ve got to make the most of it. These are easy to do and they’re very easy not to do.

These things that I’m giving you, Monopoly, Cashflow Board Game, I think you could get both those games for combined maybe $50. All the other things that I just told you are completely free. The first three strategies are free. Implement them, tag me in the Story. I’ll respond. I can’t wait to see you guys put this into action. Here we go.

Episode #47 – Four Strategies To Raise Your Money Mindset To The Next Level
Oct 9, 2021

How do you develop a money mindset? How do you instill it in your kids? Tune in to find out. Want more? Visit me at www.myindestructiblewealth.com for more tips and tricks to building wealth. — Listen to the podcast here   Four Strategies To Raise Your Money Mindset To The Next Level I’m going […]