Building multi-generational wealth requires a combination of strategies. If you can afford to enter the highly volatile and potentially high-return cryptocurrency market, I say do it (after you have studied enough to know what you are doing).

Unlike the dollar, which can be printed, items like gold and land hold value because they are finite, limited resources. Cryptocurrency is also a finite resource, but unlike gold and land, it is digital and more easily transferrable.

Tune in to learn more, then visit www.myindestructiblewealth.com for even more free resources to build and keep your wealth.

Listen to the podcast here

Welcome to the Indestructible Wealth Show. This is the place where we help young entrepreneurs make, keep and grow wealth that you can enjoy now and for years to come. In each episode, I’m going to share my tips, resources and secrets to help you create a plan and build the life you’ve dreamed of.

While I do believe that Bitcoin is going to $100,000, I believe that it’s going to go much higher in the long run like five times higher than that. Bitcoin is going to go to $500,000 per coin. It seems crazy but let’s talk about it again. The rationale is very simple. Bitcoin and its most fundamental form, is the digital version of gold. The gold market is now an $11 trillion market. If Bitcoin gets that big, you’re talking about an $11 trillion market on 21 million tokens. Remember, with Bitcoin, there will never be written into its code produced more than 21 million tokens.

In fact, a lot of those several million have been lost and will never be recovered again, which implies a price per token of around $500,000. That math rests on the huge assumption that Bitcoin is indeed the digital version of gold, but it looks like that could already be the case. Long story short, as inflation expectations rise, investors typically, when this happens, sell their bonds then the ten-year treasury yield rises too.

They’re doing this to protect against that inflation. They’ll convert over and typically buy gold as a store of value. In 2021, instead of buying gold, they were buying Bitcoin. Bitcoin has become the go-to hedge against inflation in 2021, not gold. This doesn’t come as a huge surprise. Fundamentally speaking, Bitcoin is better than gold. I laid out that in a previous episode. I don’t know which episode it was. It was one of my earlier episodes, somewhere in the teens. You should check that out.

The modern value of gold derives its value from scarcity. Not only scarcity, but it’s an indestructible form of wealth. You know how I feel about forms of wealth that are virtually indestructible. Maybe once upon a time, gold was used to trade or barter for goods and services or was used to make swords and shields. Not long ago was used in some semiconductor chips, but those days are long gone. Now gold is used for nothing.

Its value is in the fact that it has a limited or finite supply. Therefore, it’s a good store of value, but that’s even more true for Bitcoin. Being that there are only 21 million Bitcoins in the world, there will never be more than that. Meanwhile, more gold mining efforts can always be put online in the gold market to increase supply as demand increases. In other words, Bitcoin has more scarcity than gold and therefore isn’t the digital version of gold. It’s a digital and superior version of gold.

Meanwhile, Bitcoin is digital while gold is physical and the whole world is pivoting towards digitization these days. Everything from media, shopping, entertainment to communications, work and health are digital. They call a Telehealth visit with my doctor. I don’t even have to go sit in the waiting room for an hour and all of that. I hop on right from my home computer and it’s just as good as going to the office. Everything is converting over to digital.

In that world that’s developing, money will inevitably become digital too. That’s already happening. Look at Venmo, Cash App, PayPal, all these digital money apps are soaring in usage now while the volume of cash transactions is plumbing. Therefore, Bitcoin is gold made for the modern world. You can’t send gold through a social media platform or streaming service or use it to buy goods online, but you can use Bitcoin for that. To that extent, it’s easy to see why folks are going to ditch their physical store of value gold for a digital store of value Bitcoin. While the Bitcoin market will become as big as and I think bigger than the physical gold market. 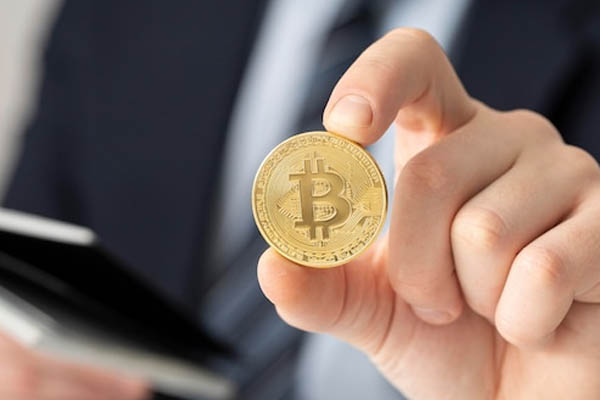 Digital Gold: Once you buy Bitcoin, don’t ever sell it, no matter what happens.

This is already happening and that means Bitcoin prices will trend toward $500,000 long-term. How long it’s going to take to get there? I have no idea. No one knows. The best guess is probably about ten years away. If so, you’re talking about an asset that will increase 10X and value in ten years. That’s a pretty amazing return, but the numbers back it up. Bitcoin is up 86%. Gold, meanwhile, is down 6.9%.

Over that time, more than $10 billion is flowed out of gold ETFs and more than $20 billion has flowed into Bitcoin funds and here’s the kicker. We can expect that gap to grow as Baby Boomers retire and Millennials take center stage. My favorite guy, you know who it is. Teeka Tiwari of the Palm Beach Group. I love this guy. He never seems to ever be wrong.

He says, “Millennials have grown up with digital assets their whole lives, so Bitcoin makes a lot of sense to them. I speak to a lot of young people who are independently wealthy. There were tens of millions of dollars through either private businesses, crypto or a combination of the two. For them, crypto is a core holding. When I asked if they were adding gold to their portfolios, they say, ‘No, I’m buying Bitcoin.’ That’s the way I sidestep what’s going on in the rest of the traditional Fiat currency world.”

Remember, Fiat currency is government-produced dollars that can be produced out of thin air. In fact, our government has produced trillions of dollars over the last year and a half, which has devalued the dollars that you’re holding. You’re not able to buy as much goods and services that the more the government continues to produce more dollars. This Millennial effect shows up in the numbers too. There’s very popular research firm called Edelman found that about 1 in 4 Millennials who are in at least a hundred thousand dollars in individual or joint income own cryptocurrencies. Roughly 1 in 3 expressed interest in using them.

Everything is converting over to digital. In that world, money will inevitably become digital, too. Click To Tweet

That’s a big deal when you consider that Millennials are the largest generation demographic in America and they’re set to inherit. You folks get this. I had no idea about this. There’s set to here, $68 trillion of their parent’s wealth. Where’s that coming from? The Baby Boomers hold, as of now, the majority of the wealth in America. Something like 60%-70% of all the wealth is in the hands of the Boomers. I think that’s gone up even more as assets stocks and real estate have gone up huge over the past months. Who holds most of those assets? The Baby Boomers.

If the Millennials put even a fraction of that wealth they’re inheriting from their parents into crypto, that’ll send demand to soar even higher. Now, that doesn’t mean you should rush out and sell your gold and/or not buy physical gold. I still think having physical gold is a smart thing. I had a gentleman on my show, Michael. Catch that episode somewhere in the episode 30s. We talked about what’s happening with precious metals.

I think that you still want to keep a portion of your portfolio and goal. Maybe about 1%. You could have up to about 10% in Bitcoin. Personally, I have about 10% of my total assets in all cryptocurrency. Not just Bitcoin. Bitcoin is around, I want to say, maybe 10% to 20% of my total crypto portfolio. Precisely, I allocate between. The two is up to you. Some people prefer more gold. What’s important is that you don’t stick with only gold and ignore Bitcoin together.

If you believe our case that Bitcoin serves the same function as gold but with a higher upside, it would be crazy not to own some. You don’t even have to fork out for one whole Bitcoin. You could buy a fraction of one in whatever dollar amount suits you. Make sure you don’t allocate too much of it to your portfolio. Hold for the long run. Once you buy your Bitcoin, don’t ever sell it, no matter what happens. It could drop 80% in value overnight. Do not sell that fucking Bitcoin. Hold on to it with a death-like grip and prepare for plenty of volatility along the way.

It is going to be a roller coaster ride in the crypto markets that you can bank on. Buy it, set it aside and don’t check it daily. Your life will be better. My life is happier when I’m not checking my crypto account. Whether it goes up or down, I know I’m not selling it. I know that I’m holding it for the next several years.

Unless the research team I work with strongly suggests taking some money off the table, I highly doubt there’ll ever be a time when I liquidate my entire crypto portfolio. This is a long term long-run asset that can move the needle on your family’s net worth. Your future wealth for your family line. Multi-generational wealth can be created now by owning even a fraction of Bitcoin. You folks have a great day. Thanks for tuning into Indestructible Wealth.

That’s a wrap for this episode on the Indestructible Wealth. If you’d like to dive deeper into your own wealth-building strategy, check us out at MyIndestructibleWealth.com and follow along on LinkedIn, Facebook, Instagram and even TikTok. Send me your questions and your financial challenges and I promise I’ll respond. Also, I’ll think you’re awesome if you share and leave me a five-star rating and review on Apple Podcast. Until next time, remember our mission here is to help you make, keep and grow the wealth you can enjoy now and for years to come.

Building multi-generational wealth requires a combination of strategies. If you can afford to enter the highly volatile and potentially high-return cryptocurrency market, I say do it (after you have studied enough to know what you are doing). Unlike the dollar, which can be printed, items like gold and land hold value because they are […]